Are ARGs Dead? A Closer Look at a Common Refrain

Editor’s Note: At this year’s StoryWorld conference in Los Angeles, Fourth Wall Studios’ Chief Creative Officer Elan Lee stated that alternate reality games are dead as part of the conference’s final panel on “The Way Forward” for the transmedia industry. As one of the driving forces at Microsoft behind The Beast, Lee’s statement questioning the role of alternate reality games warrants closer examination. Adrian Hon, one of The Beast‘s player-moderators, former Director of Play at Mind Candy, and CEO at Six to Start, penned the following opinion piece exploring the statement.

“ARGs are dead”. We’ve heard it said many times over the years, and now most recently by Elan Lee, Founder of Fourth Wall Studios, at the Storyworld conference in LA this past October. While I wasn’t at the conference I gather the statement was made sincerely, and to hear it from one of alternate reality gaming’s ‘founding fathers’ caused no small surprise.

Taken literally, it isn’t true. ARGs are still being created for properties as big as The Avengers, Team Fortress 2, and Google, and grassroots ARGs are still being made, such as the TVTropes Echo Chamber game. It’s possible that fewer advertising and marketing dollars are being spent on ARGs these days, and it’s certain that ARGs no longer command the same number of column inches that they used to – but I’m not sure that 2012 represents such a precipitous change from 2011 or 2010 in those respects.

From a commercial standpoint, things haven’t changed much either. We can’t say that “ARGs are dead” because they don’t make money, as they never really did in the first place. Almost all ARGs have either been promotional or non-profit, with the few exceptions such as Perplex City, eDoc Laundry, and Majestic not being successful enough to sustain themselves over the long term.

You could argue that promotional ARGs generate a return on investment (ROI) by, say, increasing movie ticket sales or selling more cars, but to be perfectly frank, I doubt they ever did in a truly meaningful way – and I doubt that things are any worse today, either. Certainly there isn’t much solid, independently verifiable evidence of ROI out there – instead we’ve had to rely on self-reported figures that are easily biased or falsified. One day I hope ARG designers will engage in a ‘Truth and Reconciliation’ process where we all reveal our true player engagement stats and our near-total lack of knowledge about whether that engagement represented a genuine, bottom-line financial return for the commissioners, but I suspect that will have to wait for at least another few years.

END_OF_DOCUMENT_TOKEN_TO_BE_REPLACED 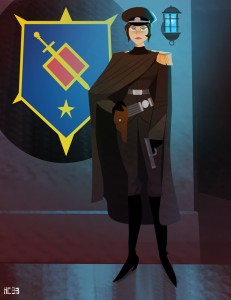 Before Adrian Hon and Naomi Alderman took to Kickstarter to fund the mobile app Zombies, Run, there was Balance of Powers. The Kickstarter campaign sought to reunite Hon and Alderman with former Perplex City collaborators Andrea Phillips and David Varela to tell an “alt-history Cold War-era spy adventure.” Finally, almost a year after meeting its funding goals, Balance of Powers is ready to see the light of day.

An update to the Balance of Powers Kickstarter page on August 1st alerted backers to the opening of the story’s website. On the first of August, a short but intriguing prologue gave a quick glimpse into the beginnings of the story and the mind of Major Sonja Slade. The August 1st update also included details on an upcoming live online event, which is scheduled to take place on August 25th at 7pm London time (4pm EST, 1pm PST). Details about the live online event and how to participate will be announced in the weeks leading up to the event.

A few days later, the first chapter posted, introducing character John Noon, the insurance clerk, while providing readers some insight into the shape and flavor of the world. The story weaves together the lives and adventures of an ex-spy who asks too many questions, an insurance clerk who is out of his depth, the daughter of a man accused of terrible deeds, and a major in the Prussian Army pursuing an investigation of the Bulgarian ambassador’s murder. In a city called Midway, the characters will come together – but for what purpose?

END_OF_DOCUMENT_TOKEN_TO_BE_REPLACED

Given $2600 and the resources of a major charity dedicated to cancer research, could you come up with an alternate reality game to help raise funds for a worthy cause? That’s what Six to Start and Cancer Research UK would like to find out. Adrian Hon, formerly with Mind Candy, announced the unusual contest on Unfiction last month.

Let’s Change the Game is a competition for aspiring ARG designers, with the challenge of coming up with the best game to raise money for Cancer Research UK and awareness of cancer in general. The first step for potential puppetmasters (after putting together a team with a minimum of three people) is to submit a 500-word design summary to the competition website by November 16th. The best summaries will be shortlisted and asked to submit full proposals. Complete details along with rules can be found on the Let’s Change the Game website. Judges include ARG illuminaries Sean Stewart, Rhianna Pratchett and ARGNet’s own Jonathan Waite.

Earlier today it was revealed on the Perplex City game site that the expected June relaunch of the popular alternate reality game would “no longer be possible.” Season two was scheduled to be released this month, but the statement on the site makes reference to the quality of the experience, and how Mind Candy believes in holding off on releases until “they’re ready and… [they’re] entirely happy with them.”

The landscape of Mind Candy itself has also undergone major changes, as Story Team members Adrian Hon, Andrea Phillips, David Varela and Naomi Alderman, as well as COO Dan Hon, have all left the company within the last 48 hours. In blog posts, Dan Hon notes that he wants “to try something new,” while his brother Adrian remarks that “it’s time… to move on.” Phillips and Alderman echoed sentiments of celebration, sadness and thankfulness for the players of PXC, and Varela chose the Unfiction forums to sum up his thoughts on the turn of events.

Details are still emerging, so watch ARGNet for further details. The story will be part of the discussion on the upcoming 26th episode of the ARG Netcast as well.

Thanks to Brian Enigma at Netninja for the summary post and links.

ARGFest 2007 Panel IV: Defining ARGs and the Future of ARG

In the fourth panel discussion at ARGFest, titled “Defining ARGs and the Future of ARGs”, I was fortunate enough to moderate what turned out to be a lively and entertaining discussion from a panel full of people I have professional and personal admiration for. The panel consisted of Brian Clark (GMD Studios), Adrian Hon (Mind Candy), Jane McGonigal (Avant Game, The Institute for the Future), Sean Stacey (Unfiction), Brooke Thompson (Giant Mice) and Evan Jones (stitch Media).

There was an opening round of statements in which McGonigal talked about her latest project, The Institute for the Future, and spoke about how alternate reality gaming can have an impact on the real world by delivering messages about important world issues. She also discussed World Without Oil, which is poised to launch in two weeks. In his opening remarks, Clark went on to state that he was interested in the idea of sustainability, noting that the community needs to find ways to embrace and celebrate all forms of ARG.

The first question for the panel was, “When asked by others outside of the industry, how do each of you describe what alternate reality gaming is?” Clark described ARG as “platformless gaming,” while Thompson focused on the story and narrative and how pieces of the story can be broken up and distributed in many different forms. Stacey agreed, and as he talked about the “collaborative storytelling process,” he added that player actions ultimately color the experience and make it unique. McGonigal focused on the idea of “massively-scaled collaboration,” where game elements “can’t possibly be solved alone,” and real-time game design. Hon interjected with humor as he talked about a “decision tree” approach that he had used in the past, and discussed the ideas of controls and using real-life interfaces within game design. Jones wrapped up responses by bringing up the accessibility and cross-platform aspects of ARG, adding that talking about the idea that “characters believe that they are real” is one of the ways he describes ARG to others.

END_OF_DOCUMENT_TOKEN_TO_BE_REPLACED

Earlier this week, Mind Candy announced that the launch of Perplex City Stories will be delayed until June, pushing back its original April release by two months. The delay will allow the Mind Candy team to build a gaming engine that allows for what Director of Play/Executive Producer Adrian Hon describes as “single-player replayable ARGs, and massively multiplayer ARGs simultaneously” in addition to allowing for extensive pre-launch testing. The video trailer on the Perplex City Stories site indicates the plot will involve a brutal murder in a Perplex City bar.

Although Perplex City Stories will be delayed, the first wave of Perplex City Season Two cards became available from Firebox at the beginning of March, and We Love Puzzles, a related website with a variety of games and puzzles is currently live.

Adrian Hon is scheduled to be a panelist on Episode 19 of the ARG Netcast series. Discussion topics will include Perplex City Season Two, among other topical ARG news.