Return of the ARG Practicum: A Three For One Deal

April 5, 2010 / Michael Andersen / Comments Off on Return of the ARG Practicum: A Three For One Deal 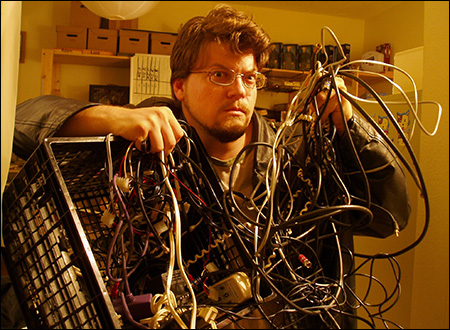 Last year, the University of Texas at Dallas’ Emerging Media and Communications program offered a practicum in ARG design taught by Deus City developer and UT-Dallas professor Adam Brackin. Over the course of the semester, the class developed and produced the Electron Innovations alternate reality game. This year, Brackin’s ARG practicum, affectionately referred to as “ARGlab 2.0,” is back with three new alternate reality games. According to Brackin, these three projects will reflect his Circular Model of ARG Development embracing parallel games, sequels and spin-offs within a shared “game world.”

While Electron Innovations was the product of a six-person team, ARGlab 2.0 is comprised of 20 students divided into four teams. Three of these teams are developing alternate reality games. The fourth team is documenting the creative process of the other groups, and will publish a “making of” documentary upon completion of the ARGs.

The three ARGlab 2.0 ARGs can be found at priestlyindustries.com, iknowwhathappened.wordpress.com, and sunshinebooks4less.com. Priestly Industries explores a contest to win $10 billion in venture capital from the wealthy and eccentric industrialist Gerard Priestly, while I Know What Happened follows novice geocacher Becka Belle as she tries to figure out the meaning of a mysterious box she discovered. Sunshine Books 4 Less, on the other hand, revolves around a series of strange, defaced posters scattered around downtown Dallas.

END_OF_DOCUMENT_TOKEN_TO_BE_REPLACED

Last fall, veteran alternate reality game designer Adam Brackin taught a class on alternate reality gaming at the University of Texas at Dallas’ Emerging Media and Communications program. The course required graduate students interested in the developing field to read a series of academic works on the subject, learn about the history of the genre, and follow a currently running game. This semester, Brackin is offering students the opportunity to put their theoretical knowledge to the test with the ARG Lab, a class where students will design their own six-week long alternate reality game, scheduled to launch in early April.

Brackin’s graduate students seem eager to trade their tuition dollars for the opportunity to experiment with game development through the practicum. Candace Barnhill, one of the ARG Lab students, explains that “we learned so much about the history of ARGs and player experiences last semester that I coudn’t resist a peek behind the curtain. I had no idea PMs did so much to prepare for what often appears to be player developed.”

END_OF_DOCUMENT_TOKEN_TO_BE_REPLACED

How committed are you?

The name Deus City should be familiar to some, as we have reported on it numerous times over the past year-plus. This Alternate Reality Game launched in November of 2006 and wrapped up almost exactly a year later, developed by a team led as part of Adam Brackin’s doctoral project at the University of Texas in Dallas.

ARGNet can reveal that a doctoral dissertation is not the only likely result from this team, however. In post-game contact, the puppetmaster team from Deus City hinted at an upcoming project with a teasing few letters of a domain name, “www.conspi….” The complete URL may be found by watching this video, “Conspiracy Asylum File Zero,” which was recently uploaded to YouTube (or it could also be found by clever parsing of this paragraph).

Our sources tell us that the above video is something of a beta-test but that we can expect a public launch around the first of February. Fans of Deus City who are aching for more contact with the universe may be pleased by the setting of the upcoming game in the same universe as the prior, although our sources also tell us that this story will not be directly related nor a sequel to DC, so players unfamiliar with Deus City need not be deterred from joining in. Here’s another one to look forward to in 2008!

Deus City, a new, promising ARG is scheduled to hit the internets in the spring of 2007, and ARGN has been fortunate enough to have learned a couple of things about the project.

Deus City is a student-run project from the guys and gals at University of Texas – Dallas, in cooperation with Fundi Technologies of Dallas. The plot will revolve around communication with a community, Deus City, located in the future. The gameplay is currently framed around puzzles and that unlike the current hit, Perplex City, the puzzles will primarily reside online. On the more ambitious side of the project, the game is planned to have features such as dynamic point structures based upon the players’ ability to solve the puzzles correctly with the fewest number of guesses. There are also hints to a “virtual future economy” structure that could also lead to some interesting gameplay. Also intriguing is the idea that the game will attempt to integrate morality into the gameplay structure, as to give at least two different paths a player can run through the game, with moral and ethical implications as a result of the decisions made in the game. Hand in hand with this idea, is a karmic statistic system that, while not fully disclosed at this time, is intriguing to say the least, and could be just one more element in the building of a groundbreaking Alternate Reality Game. To quote the head developer of the team working on Deus City, “We feel that contact with our future selves is imminent and that the world that awaits us will be much more than it seems at first contact.”