Everything You (Probably Don’t) Need to Know About Cloverfield

Bad Robot is releasing a new Cloverfield movie on 03-11-16, more than eight years after its cinematic debut. The film, 10 Cloverfield Lane, isn’t exactly an official sequel to the original, but has been described by JJ Abrams as a “blood relative” to the film. Whether this blood relative will mark the return of the enigmatic Cloverfield Monster remains to be seen, but the familial resemblance is evident with 10 Cloverfield Lane‘s new alternate reality game.

It’s highly doubtful that a thorough understanding of a eight-year-old viral marketing campaign will be required to enjoy the return to the Cloverfield universe…but then again, it can’t hurt to be prepared for anything.

The Mystery of 1-18-08
On July 4, 2007 moviegoers were treated to a trailer for a JJ Abrams film with no name. All they had to go on was shaky footage of the surprise farewell party for a cool dude named Rob, wholesale destruction of property by…something, and a date: 1-18-08.

From the date, players quickly discovered the (now-defunct) 1-18-08.com, which served as home for a growing collection of photographs. Click on a picture and shake it enough, and you might flip it over and find a message or two. Stay on the site long enough, and you might catch a muffled roar. But for the “main” Cloverfield site? That was pretty much it.

The story emerged as players explored beyond the photographs. One path led players to tracking down (now blank) MySpace profiles of a group of friends that would eventually gather for an ill-fated party on January 18, 2008. Yes, MySpace. Hey, it was a different time. Jamie Lascano was particularly active, and set up the website JamieandTeddy.com to document her only slightly creepy long distance relationship with Teddy Hanssen through a series of private vlogs, protected under the password “jllovesth”.

END_OF_DOCUMENT_TOKEN_TO_BE_REPLACED

New Star Trek Trailer Hides Question: Are You the 1701?

Yesterday, Paramount released its newest movie trailer for Star Trek: Into Darkness on iTunes. As the second film in JJ Abrams’ re-imagining of Gene Roddenberry’s original franchise, fans have been speculating wildly about whether Abrams would retell Star Trek II: The Wrath of Khan or explore a different aspect of the mythos through the film’s villain, John Harrison (played by Benedict Cumberbatch). Now, fans have a new question to speculate wildly about: are you the 1701?

As the camera zooms in on John Harrison at the 1:07 mark on the trailer, a display panel shows the website AreYouthe1701.com, a website featuring a simple registration page in grayscale.

JJ Abrams’ first Star Trek film was prefaced with Alert Vulcan, an intensely immersive alternate reality game that started similarly, with a website hidden in promotional photographs from a Star Trek event in Paris. The game eventually included a staged Romulan crash site in the UK, a crime scene with green blood, and a personal YouTube video from Leonard Nimoy thanking the most active players for their help.

Most of JJ Abrams’ projects find life outside the television screen or cinema. with this new Star Trek viral finding its place in a long line of puzzles, cross-references, and alternate reality games tracing back to the Alias Web Puzzle in 2001. It’s too soon to tell what form this particular iteration will take, but it’s the perfect time to decide: are you the 1701?

A Super 8 Update: Rocket Poppeteers Blast Off at Comic-Con, Into Your Homes

August 8, 2010 / Michael Andersen / Comments Off on A Super 8 Update: Rocket Poppeteers Blast Off at Comic-Con, Into Your Homes 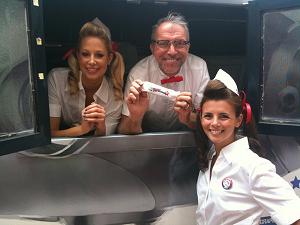 Details about the project code-named Super 8, a new film by J.J. Abrams and Steven Spielberg, are still ensconced in mystery. And while the movie’s viral campaign offers scintillating tastes of what the film may eventually offer, putting those pieces together is a daunting task, made even more difficult thanks to recent updates. What do vintage Rocket Poppeteers brand popsicles have to do with an antiquated PDP-11 simulator, and how does a collector of rare and unique fish figure into things? While this article will have few answers to these seemingly outrageous questions, it will provide some context for this alternate reality game as it circuitously provides a preview of things to come in the upcoming film.

Last May when ARGNet first covered the Super 8 alternate reality game, players were waiting patiently for a PDP-11 simulator designed by “D. Morris” at the Scariest Thing I Ever Saw website to finish downloading a file. Once the file transfer completed, players could print out two newspaper clippings bearing an advertisement for Rocket Poppeteers brand popsicles, along with some oddly placed redactions. Lining up the two articles and cutting out the redactions reveals a message that Super8News interprets as “No certainty if alive, [it/they] may be after us, we go underground.” Both Rocket Poppeteers spokesman “Coop” Cooper and PDP-11 programmer “D. Morris” have been linked to Dan Morris and Gordon Cooper, real people who play prominent roles in alien conspiracy theories.

The Rocket Poppeteers advertisement served as more than the vehicle for an ominous message. Some players attempted to become a Rocket Poppeteer by mailing the newspaper clipping in to the listed address, and subsequently received a letter welcoming them into the Rocket Poppeteers Astronaut Program. At Comic-Con, the Rocket Poppeteer twitter account reported locations where conference attendees could visit an ice cream truck for popsicles and t-shirts from friendly ice cream men (and women) decked out in old-fashioned apparel. The Rocket Poppeteers website has opened up for online registration, so it’s not too late to get in on the popsicle-related fun, however it relates to the upcoming Super 8 film.

END_OF_DOCUMENT_TOKEN_TO_BE_REPLACED

The Scariest Thing I Ever Saw: Another JJ Abrams Viral

Editor’s Note: for information on events since this article’s publication, check out ARGNet’s follow-up article on the Super 8 alternate reality game.

Over the past few weeks, rumors have been floating around about Super 8, a new movie by JJ Abrams. Many speculated the film would be the newest installment in the Cloverfield universe. Abrams is going to extreme measures to maintain the mystique of this new project, sending the film’s trailers to theaters in canisters that required special codes to open. Despite these security measures, a “bootleg copy” of the trailer was posted on YouTube prior to the trailer’s release during select Iron Man 2 screenings at last night’s midnight showings.

Hidden within the trailer was the phrase “THESCARIESTTHINGIEVERSAW,” leading astute followers to the website ScariestThingIEverSaw.com, which accesses a “PDP-11 Simulator” operating on a remote desktop. The simulator was developed by “D. Morris” on February 5, 1977, and executes an as-yet-unknown operation that takes days to load.

Very little is known about Super 8 or its related viral experience, although MovieViral.com has provided a succinct summary of what little information is available. Abrams has gone on the record clarifying that the film “has nothing whatsoever to do with Cloverfield,” but has remained silent on any further details regarding the project. Abrams has a proven track record of building buzz around his projects through interactive experiences that attract dedicated followings (including viral campaigns for Star Trek, Fringe, Cloverfield, LOST, and Alias) so this newest installment might be worth exploring.  Abrams’ alternate reality games have been inconsistent at times, considering the cancellation of LOST‘s Dharma Initiative ARG and the Fringe ARG devolving into a series of glyph ciphers hidden in each episode.  However, the highs seem to be overpowering the occassional low.  Two LOST alternate reality games have won a Primetime Emmy for Interactive Media – Fiction, and WIRED’s puzzle-filled “mystery issue” guest-edited by Abrams won an Ellie for best special-topic issue.  Furthermore, Abrams’ most recent alternate reality game Alert Vulcan demonstrated that he is still willing to go the extra mile to provide an immersive transmedia experience that crosses over into the real world, so this may very well turn into the scariest thing I ever saw.

UPDATE 05/08/2010: the original leaked trailer has been deleted from YouTube.

Alert Vulcan, After the Fact 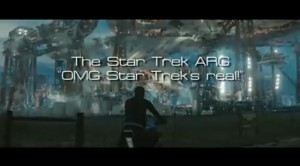 The most recent Star Trek movie has been a rousing success, earning $76.5 million on opening weekend. And like many projects involving JJ Abrams, Star Trek was promoted using an alternate reality game, Alert Vulcan. While the game has wrapped up, one fan has created a video summarizing the experience, and five lucky players are still receiving rewards for their contributions in the mail.

Back in April, Hollywood party blogger The Cobra Snake posted a series of Star Trek mixers in Hollywood and Paris. Hidden in the background of some pictures were barely discernable text strings that led players to a distorted video of the Narada, Captain Nero’s Romulan vessel in the film. Further code lead to a chat log of five Romulans conversing in English, French, Spanish, Japanese, and German.

One of them left an item in France, which was recovered by “Malako.” Following a series of clues, players uncovered a staged Romulan crash site with Romulan symbols visible from the air. They also gained the ability to manipulate a digital hologram of a starfield via webcam by going to johannbayer.eu, entering the code U04C5NMD413, and printing out the background image, using a system similar to the Experience the Enterprise viral.

Eventually, players received phone calls explaining the situation: two sets of Romulans crash landed on Earth, with one group attempting to help Captain Nero destroy Earth, and the other group attepting to prevent it. By recreating a transmission at AlertVulcan.comand reposting the file across the internet, players were able to prevent the end of the world.

Capping off the alternate reality game, Leonard Nimoy personally congratulated the participants on YouTube, five players in particular. Matt was selected to receive a replica of the USS Enterprise, while the other four top contributors received a collection of Star Trek related products pictured here and here.

Special thanks to ellisrico for putting together a great video summary of the game.

On the May 4th, 2009 episode of the Colbert Report, Stephen Colbert spoke with writer, director and producer J.J. Abrams about his directoral role in the upcoming Star Trek film. Scattered throughout the episode were clues to a puzzle of a slightly different sort.

No stranger to alternate reality gaming, JJ Abrams has made a name for himself in the industry starting with a series of puzzles surrounding his television series Alias in 2001. Since then, JJ Abrams has made his mark on the industry with popular viral campaigns for Lost, Cloverfield, Fringe, and Star Trek. Now, it seems Abrams has inspired Stephen Colbert to test the puzzle solving skills of the Colbert Nation by hiding a handful of clues to the answer to his ongoing segment, “Where In the World and Where In Time Is Stephen Colbert Going to be in the Persian Gulf?” The segment deals with Colbert’s upcoming trip to somewhere in the Persian Gulf at some point in the near future to perform the show in front of American troops overseas. Colbert is not allowed to disclose further details for security reasons, so he discusses places he might visit.

Scattered throughout the episode, Colbert flashed six four character text strings in places including an audience member’s shirt, JJ Abrams’ cup, and the books on a bookshelf. The Colbert report has a history of engaging its audience, including recent efforts that include write-in efforts to name a module of the International Space Station “COLBERT” and remix an interview with Lawrence Lessig about remix culture.

The folks at Colbert Nation are hard at work cracking this puzzle.

Image courtesy of You’re On Notice!