Among the night’s winners were a few series that utilized alternate reality games as part of their storytelling. MTV’s Valemont took home the awards for Best Interactive Experience in a Web Series and Best Mobile Experience in a Web Series. The series was produced by Gemini Division veterans Electric Farm Entertainment, and consisted of a series of two and a half minute episodes broadcast on MTV.com and through Verizon Wireless’ V Cast service.

Nina Bargiel was tapped to create the alternate reality game for the series that allowed players to enroll at Valemont University, interact with characters across various social media, and participate in the show’s ongoing murder investigation. Since the episodes were so short, the alternate reality game became an integral element in the story’s development. Indeed, after the game’s conclusion, Valemont released two alternate endings for the series. Electric Farm Entertainment is set to produce a Valemont spin-off TV movie and five half-hour episodes that could be slated into a full series in the future. Winning two Streamy Awards may help push these plans forward for the web series and alternate reality game.

Riese will also be returning from the Streamys with an award, after picking up Best Cinematography in a Web Series. The show promoted its release with an alternate reality game that brought the series’ distinctive steampunk flair to life. Riese, like Valemont, has partnered with Fireworks International to manage the show’s transition from web to television.

Riese the Series: Delivering Transmedia with a Side of Steampunk 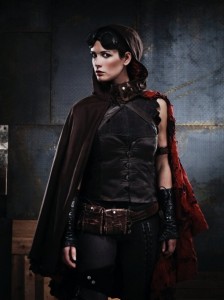 The dystopian kingdom of Eleysia has its priorities in order: rather than developing automobiles, telecommunications technology, or a democratic political structure, its citizens have perfected the use of tinted goggles as a fashion accessory. Starting later this week, members of an Eleysian religious cult known as The Sect will start proselytizing their ways to our world. You can already view some of their highly stylized promotional materials at their website, TheSectIsHere.com. This alternate reality game serves an introduction to the transmedia world of Riese, an upcoming web-series scheduled to premiere early this November.

In The Sect Is Here, members of the enigmatic religious cult from the Riese universe have managed to reach our reality, along with a lone renegade seeking to stop them. Through both online and location-specific puzzles, players will have the opportunity to unravel the mysteries surrounding The Sect’s real intentions, in both our world and Eleysia. The alternate reality game will extend past the web-series’ November premiere, and will enter a media mix intended to include print, web, mobile, and television.