Discovering the Lovely City of Milwaukee 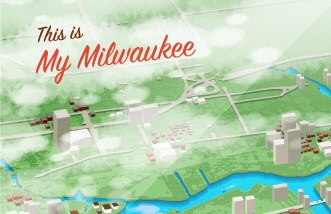 A breath of fresh air swept through the alternate reality gaming community last month when This Is My Milwaukee came to town. The surreal, humorous and down right strange 10-minute promotional video is so dense with story and snippets of clues scattered through-out, that it requires many viewings to fully digest.

As the video explains, Milwaukee was home to a corporation known as Blackstar. Blackstar employed many locals and developed some sort of meta-being known as Go.D.S.E.E.D. With the arrival of Go.D.S.E.E.D came the subsequent destruction of much of Milwaukee’s natural environment. As there was no other option, project Go.D.S.E.E.D had to be destroyed, and so it was put to rest, buried deep below Milwaukee’s Canning District in an emerald casket. However, Go.D.S.E.E.D fragments still attack the locals from time to time. Sheltering one’s self in buildings with proper protection or carrying a flare gun and a rebreather is vital to one’s protection from Go.D.S.E.E.D fragment attacks.

Soon after the ARG was released, the emergence of a possible dead drop became apparent. Hidden at the bottom of TIMM’s website was a link to a YouTube video. When the video title’s long string of numbers was decrypted, it revealed the New York Public Library, Rose Reading Room, South Hall. At the end of the video was the call number AI3.A23. An Unfiction forum member went to the NYPL and successfully found the book referenced in the video, which revealed a sheet of paper with a picture of a fennel bulb and a new phone number.

END_OF_DOCUMENT_TOKEN_TO_BE_REPLACED

Y-Y-You Will See Such Pretty Things

A few unlucky players recently found themselves feeling ill after watching The Wyoming Incident, a short film uploaded to Google Video in August of last year. Whether due to the power of suggestion, an uneasiness induced by odd frequencies, or coincidence, the sensations led curious viewers to further research the information included in the video’s description.

“The Wyoming Incident (or The Wyoming Hijacking) is a lesser known case of television broadcast hijacking/hacking. A hacker managed to interrupt broadcasts from a local programming channel (believed to serve several smaller communities in the county of Niobrara) and aired his/her own video. The video contained numerous clips of disembodied human heads showing various emotions and “poses”. The camera position changed often (usually every ten-to-fifteen seconds) and the video was often interrupted by a “SPECIAL PRESENTATION” announcement…The video is mostly locally well-known, and would probably not even be that popular if it were not for the effects it had on the few residents who watched it for an extended period of time. Complaints included vomiting, hallucinations, headaches, etc. While some believed it was paranormal, specialists have determined that the cause of these afflictions were frequencies played regularly throughout the broadcast.”

Four more videos have been found containing similar images and more cryptic text, and other game elements, including a serial killer forum, creepy warnings of black-eyed children watching player movements, and allusions to mind control have players scurrying to find the true intentions of The Wyoming Incident hijacker.

The white-hot spark of a YouTube user named LonelyGirl15 has set the dry timber of the summer Internet community ablaze. Ostensibly the video blog of a teenaged American girl named Bree, the 23 videos posted so far have chronicled a budding romance with a boy named Daniel, but there’s a twist: Bree’s family is very religious, she is home-schooled, and she has pledged a “purity bond” with her father. Even stranger is the fact that Bree’s religion is never named, and in fact on various comments on YouTube she has said that it is not mainstream – “We’re not Christian or Buddhist or Hindu or anything like that.” There’s also a mysterious picture of famous occultist Aleister Crowley on Bree’s bedroom wall, above a candelabra which she’s vehement that Daniel not light. And wait – that Crowley picture is new – it used to be something else (could that possibly bear a resemblance to Baphomet?) A dark twist, indeed.

Buzz has it that the videos are too pat, too scripted, and too professional looking to be anything but some sort of viral campaign. Indeed, the clues are there. Bree initially gained an audience by making engaging and humorous videos featuring popular YouTube users. She’s very cagey about revealing any personally revealing information about herself, often completely dodging uncomfortable questions. Perhaps more telling is the fact that a vanity website under her name was registered on May 12 – almost two weeks before she showed up on YouTube. Those following the saga wonder how she knew she would become an Internet sensation before posting a video (her excuse: Daniel did it to tease her).

END_OF_DOCUMENT_TOKEN_TO_BE_REPLACED

Players of Perplex City have been hard at work this month on submissions for a video contest, and recently, submissions have made their way onto YouTube, a popular online video streaming service. As we told you earlier this month, the video contest is part of a campaign to promote the city which is central to the ongoing alternate reality game, entering its fourteenth month of continuous game play. While ARGN is definitely not in the business of film criticism, I personally viewed all 35 that were up for viewing and found a few that were funny, some that were extremely well-made, and one or two entries that were rather…. interesting. Here are my (completely unofficial) must-see picks:

END_OF_DOCUMENT_TOKEN_TO_BE_REPLACED

As announced last Thursday at PerplexCity.com, Mind Candy and You Tube of, well, you know, Earth, as well as the Perplex City Academy and the Open Design Agency of Perplex City, are beginning a video contest to promote Perplex City, as well as the game with its namesake. This marks the first time an Alternate Reality Game will incorporate user-generated video into the realm of the game, and has inspired many of the PXC player base to pick up their cameras and start shooting.

According to the Perplex City official contest page, videos will be accepted for a four week period which started April 27th. The video submissions should illustrate “the Joys of Perplex City” — whether that means the city itself, or the game, is likely intentionally unclear. As well, videos must be 30-90 seconds long and family-friendly, and everything contained in the video must be either entirely original, or free from copyright restriction (read: Creative Commons). Beyond that, apparently, the sky is the limit.