Chasing Down a Healthier Heart: Cryptozoology is Hard Work 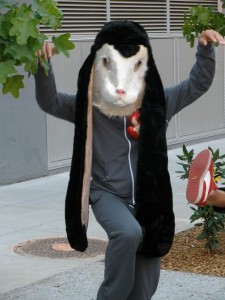 I saw a ninja rabbit this weekend.

Even for San Francisco, that’s a little out of the ordinary. But if Jane McGonigal and the American Heart Association have their way, you’ll be seeing a lot more of the elusive ninja rabbit and its cryptid compatriots over the coming months as part of Cryptozoo.

Cryptozoo (pronounced crypto ZO-oh) asks players to put themselves in the role of cryptozoologists, searching the city streets for cryptid tracks in the hope of a rare encounter with an elusive cryptid. Each cryptid has a particular method of running, and will be scared away unless the cryptid chasers match its movements. For example, cryptozoologists searching for a Slamina run backwards, making sure they don’t step on any cracks. More competitive cryptozoologists can challenge teams to a race mimicking one of the thirteen different species of cryptids. Players keep track of their steps with pedometers, and after completing 5,000 steps are inducted as official Cryptozoologists.

The first two official Cryptozoo chases occurred in San Francisco on June 5th and June 7th. Next week, the game is moving to New York City, where cryptic cryptid clues will be broadcast on the MTV screen in Times Square on June 12th from 11PM to 1AM. A second chase will occur in New York City on June 13th.

The game was spawned due to a prediction from the Institute for the Future that by 2019, the dividing line between exercise and play would erode. The American Heart Association challenged IFTF to make it happen sooner, and Jane McGonigal and her team picked up the gauntlet. Drawing heavily upon parkour for inspiration, Cryptozoo lowered the barrier for entry of the activity by focusing on simple tasks that transform urban environments into playgrounds such as running along curbs, sliding under railings, using parking meters as vaults, and spinning around trees. Natalie Cartwright created character designs and costumes for the various cryptids to add an additional layer of adventure to the experience. San Francisco cryptid chasers encountered a Slamina, Triptree, and Ninja Rabbit. Large gatherings of players organized on the Cryptozoo homepage may lead to additional appearances of wild cryptids.

Chasing cryptids is tiring work, but the experience is fun. Really fun. A number of random passerby joined the group for Friday’s late night run through the SoMA streets and gardens. And although this past weekend was the official launch of Cryptozoo, multiple groups met up in the United States, England, and New Zealand to give the game a try. Jane McGonigal explains that as people interact with their environment more in their day to day lives, there’s less of a need to go to the gym to get a workout. Her hope is that players will start to look around their communities and wonder:

Wouldn’t it be fun if I…