Prank Marketing and the Toyota Matrix: How Far Is Too Far? 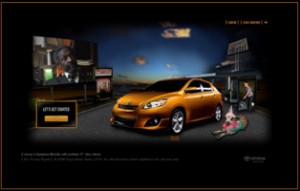 In 2008, Toyota Motors paired up with Saatchi & Saatchi Los Angeles to release Your Other You, an advertising campaign promoting the Toyota Matrix. Targeting male twentysomethings, the campaign crafted an elaborate transmedia prank experience to overcome the demographic’s strong aversion to advertising and corporations. Saatchi’s creative director told OMMA Magazine that the campaign was all about “empowering the customer…we wanted them to be involved and to feel like they were part of the process.”

According to a complaint filed in the Los Angeles Superior Court on September 28 of this year, Amber Duick did not feel empowered after experiencing the campaign firsthand. The complaint accuses Toyota, Saatchi & Saatchi, and fifty individuals associated with the campaign of: (1) intentional infliction of emotional distress; (2) negligent infliction of emotional distress; (3) negligence; (4) unfair, unlawful, and deceptive trade practices, (5) false, deceptive, and/or misleading advertising; (6) violation of the Consumer Legal Remedies Act; (7) fraud; and (8) negligent misrepresentation. Duick is seeking $10 million in compensatory damages.

Starting in February 2008, print, outdoor and banner ads drove traffic to yourotheryou.com. There, users were encouraged to prank a friend by providing personal information about them including their address, phone number, and alma mater. According to Nicholas Tepper, Ms. Duick’s attorney, the prank’s target would receive an email with a “personality test” containing a link to an “indecipherable” consent form. For the next five days, one of five maniacs would contact the target with personalized texts, emails, phone calls, and videos. The user could track the prank’s evolution through a dashboard indicating which messages their target received over the course of the campaign.