The quick and dirty: New ARGs pop up, like, everywhere! 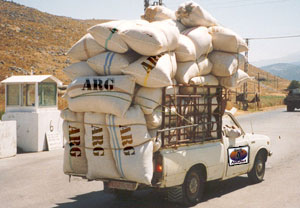 Don’t mind us — we’re just catching up on the latest round of alternate reality game launches, via the ARGNet tipline/inbox/mailbox. Here is what we know of, in no particular order:

(1) Eklipse Global: We first heard about this game through the LiveJournal blog of staffer Geoff May, and were reminded again of its existence when we picked up our post-ARGFest mail. After sitting at the post office since the 18th of July, the USPS Priority Mail envelope was opened to reveal a letter, and a mysterious message: IF YOU HEAR THE HUM IS TOO LATE!!

The letter notified “ARGN” that the decision committee did not select our marketing campaign bid as the winner. We’d be crushed, had we actually submitted a bid, but since we didn’t, um, yay? Later in the letter from Reinhart, the president of Eklipse Global, he assures us that their decision is not a reflection on our expertise or professionalism, which is a relief, because personally, I’d never work for a company run by a one-name person — and yes, that includes Madonna Inc.

This is only the start of the crazy amount of new ARGs that have appeared out of the chaotic fiction ether in the past few weeks — head on over the jump for the rest of the list.

(2) We received a tip from someone named qui on July 12th that read: stay alert in vancouver; [email protected]; the first peice [sic] is coming soon; look to the streets. We only repost this email address, incidentally, because it was in the body of the email itself, so it must be important somehow. Beyond this, however, we know nothing, and have scoured the Unfiction forums and the Google for more information on sixteenfifteenfive. Did anyone in the city of Canucks see or hear anything about this? We sent an email, and are waiting for a response.

(3) In a tip received on July 21st — right smack dab in the middle of a trip to the Boston Aquarium — we received a link to last-command.com. The site is Matrix-esque, and promises, “When the last command runs, this site may save your life.” Sweet! Now, if only we knew what the last command was, so we’d know to watch out for it. In the meantime, we can tell you that the domain information is conveniently hidden by Domains by Proxy, and that tonight we submitted our email, with this as the speedy response:

you are becoming part of the last command.

three pieces of already-public data will add you to the dnk subroutine. answer honestly or begone.

give: 1. your full name (“Jonas Sternberg”) 2. your city of birth (“Vienna”) 3. a parent’s name and relation (“son of Moses”). all three are needed. parent’s name and birth city can be withheld from publication upon request.

end the message with a complete statement from those three pieces of data. “Joseph Steinberg of Vienna, son of Moses.” done.

save yourself. enter into the subroutine. your information and e-mail will not be shared or sold – until it is taken from us all.

We responded with “Evan Chan of Shanghai, son of Nancy.” Bonus points for those who ‘get it.’ If anything else develops, we’ll let you know…

(3) On July 23rd (yay, getting closer to days late instead of weeks late!) we received a link to a press release about the new alternate reality game for the hit BBC3 television show Spooks. It’s called Spooks 9, and there are some recognizable names behind the scenes on the campaign, including Dan & Adrian Hon of Six to Start, and Tony Walsh of Phantom Compass.

Although the press release promises that www.libertynews.co.uk will play a central role in the narrative, we tried surfing over to that URL and were redirected to the BBC site instead. So, unless this is one of those annoying you’re-not-from-this-country-and-thus-you-cannot-view-this-content things, the game must not be quite live as of yet — and yes, we did read the the game would be, ‘[g]oing live in the weeks prior to the transmission of Episode 1,” but how many weeks is weeks?

(4) Seek the Six. Got the word on the Unfiction forums that there was a mysterious picture selection Flash game, and it’s been found out to be a tie-in for AMC’s remake of The Prisoner. Not much to report here, but something to keep an eye on, perhaps. Incidentally, there was a bit of ComicCon tomfoolery afoot as well in which skywriting and t-shirts generated some buzz — coverage of this at the Durgid Tiction blog.

(5) Finally, word comes to us from an intrepid reader that there are strange happenings on the streets of South Africa. According to tipster Gottlieb, a major disturbance caused commuters to be late for work on July 25th. The source of the disturbance? A guerilla garden containing blue and yellow cellophane flowers and small plastic windmills. Apparently this was all a part of Can You Twist, South Africa’s first online reality show which features a series of short stories all of which end in real life, ARG-type twists. Sound very, very cool – head over to the show’s web site for more information.

So, that’s the wrap-up on our end, for today. You may have noticed new icons in our Now Playing section for a few more games: “Deleted the game,” “8 Days, 13 Lights, 42 Hours,” “American Vampire League,” “Ingen-Bio” and “District 9”. We actually have reporters on the scene of those new campaigns who are preparing more in-depth reports for early next week, so stay tuned…

If you didn’t already know, you can always tune into the Unfiction forums News & Rumors section and Despoiler for even more breaking news on alternate reality gaming. Also, we are experimenting with a Twitter feed for breaking news and links to our latest articles, so if you’re a Tweeter, follow us!

Tying up loose ends in fairyland