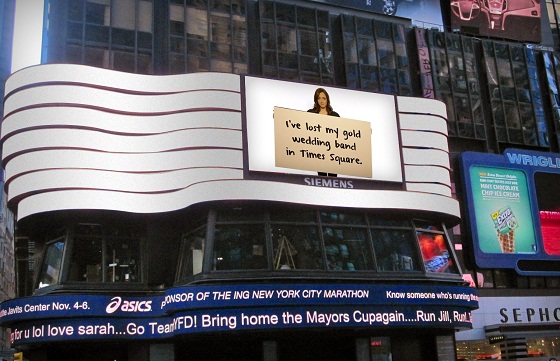 On Miranda’s recent vacation to New York City, she lost her gold wedding band in Times Square. And she’s so desperate to recover the band, she’s offering a $5,000 reward for information leading to its safe return. Miranda is encouraging good samaritans across the country to turn to Twitter to help her in her search.

Miranda’s lost ring is part of the Lost Ring Hunt, an interactive contest sponsored by the World Gold Council. Starting tomorrow, a billboard in Times Square will display Miranda’s desperate plea, kicking off an adventure that will have both New Yorkers and online participants interacting with the characters to uncover clues leading to the ring’s location. And while the missing ring might not be real, the reward most certainly is: the first person to submit the proper response to the email address disclosed though the story will win a $5,000 cash prize and a trip for 2 days and 1 night in New York City to participate in a promotional shoot for the campaign.

Interested in following along? Keep an eye on the game’s Twitter account, LostGoldRing, as well as the Gold Ring Hunt tab on the World Gold Council’s Facebook page, which houses the official rules for the contest. And if you’re in the area on Boxing Day, feel free to take to the streets and see what information you can drum up on Miranda’s lost ring.