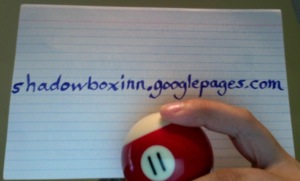 In the mail today was a plain brown box, light in weight but heavy in mystery. Inside was a postcard featuring the URL shadowboxinn.googlepages.com on one side, and the numbers ‘808080808’ on the back. Along for the ride was a pool ball, number 11, which looks fairly ordinary.

A quick Google search turns up this thread on the Unfiction forums, which started just over a month ago. From what we can glean from the thread, there have been a number of web-based discoveries, including a MySpace page, and a countdown on the front page, set to expire in just under three days. So, given the timely nature of the countdown — I guess Steve Peters was right, countdowns are very useful tools — we expect things to heat up in this campaign sooner than later.

Update: Upon closer inspection of the box, and some diligent investigative journalism (read: Google search), we have found two more connections to shadows. The first comes from the signature the sender provided when sending the package — a must for Canada Customs when sending packages from the U.S. — which looks to be Lamont Cranston. Lamont Cranston happens to be one of the alter-egos of The Shadow, the popular fictional vigilante that has appeared in radio, television and film dramas since 1930. The second clue of shadowy importance is the return address, which matches that of the Shadowbox Cabaret. We’re unsure if these specific references will be important in the scheme of the game play, or if they are simply meant as atmospheric affirmations of the game’s name, but we thought they were noteworthy to mention.