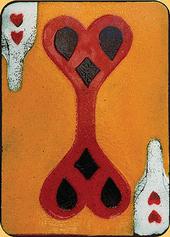 Did you have your alarms set for today at 11:11 a.m? After all, this date has been circled on the calendars of many alternate reality game players as the day the rabbit hole at SilverLadder.com opens. While the site is currently down (temporarily, we assume and hope), this gives us a good opportunity to catch up on what’s happened so far.

On September 21st, a playing card with a MySpace page contacted unFictologist Satims. Satims alerted the unFiction community to the message from “2 of Clubs” that directed their attention to SilverLadder.com and a video on YouTube. Later that week, after entering their phone numbers into a form found on the SilverLadder website, several unFiction members began receiving phone calls from “The Deuces”, who described themselves as drones sent out to alert people of SilverLadder’s existence and its soon-to-be-opened rabbit hole. Other characters, identified by their place in the 52-card deck, revealed themselves to players through phone calls, IMs, postings on MySpace, and videos.

The SilverLadder website has deep roots in internet history. It has existed in one form or another since around 1999 as an interactive art project and has been referred as “The Bad, Scary Place.” A mirror of the “Bad, Scary Place” can be found on the SL Team website. A visit to the SilverLadder website currently reveals an clickable web of images, quotes, pages from a travel journal, videos and soundclips. Scattered through this hyperlinked maze are references to Alice and Wonderland, the Beatles, the Bible, nuclear war, and global warming.

Because of its long history, references to SilverLadder are scattered around the internet. Eager to know more, players discovered an entry on Aboutus.org that referred to SilverLadder.com as a tribute to Shane Watson, the former owner of the website who is believed to have died in Tucson, Arizona, on June 11, at 11:11 p.m. (Note: The PMs have requested players not to attempt to contact Shane Watson’s family. Since the (re)discovery of SilverLadder.com, its Aboutus.org entry has been changed to a recipe for tasty cake.)

The Aboutus.org entry also revealed that after Shane Watson’s death ownership of the site was transferred to the mysterious Athena Snows. (unFictologist scaremongerR noted that Athena Snows is an anagram for Shane Watson.) Athena, the “Queen of Hearts”, initially interacted with players, even visiting them in the #SilverLadder chat room. She is now held under a vow of silence until after today’s event.

As the players attempted to uncover the story behind the website, SilverLadder and Athena Snows’s MySpace profile were hacked by an entity calling itself “The Korporation.” The Korporation’s distributed message references the “Paul is Dead” hoax by the name “William Shears Campbell” on the image it posted to the website. Later, one of the Jokers from “The Deck” confronted players in the SilverLadder chat room using the name “explodingonion” and revealed himself to be the original hacker of the SilverLadder site. He is also known as “Slaveriddler”, an anagram of “SilverLadder”.

So what happens when the rabbit hole finally opens? According to a message on SilverLadder the current state of SilverLadder is “not relevant to the journey” and will change drastically once that journey begins. One card from the 52-card deck will appear on SilverLadder over the course of a year, beginning with the “2 of Clubs”, and information about the “journey” will be doled out slowly over time. At the urging of “The Deck”, players – sometimes referred to as “passengers” – have begun creating their own content to recruit more passengers before the rabbit hole opens.

Whatever its nature and purpose – “art, a movement, a gathering, a statement, a journey, a story, nonsense and confusion, noise” – SilverLadder seems to fervently embrace the “chaotic” in Chaotic Fiction. Players have responded to the anticipation of the rabbit hole opening by creating banners, a team website and in-game forums, a blog, videos, and more. Some of this content has been incorporated into the SilverLadder website, and the PMs responded to the players’ enthusiasm with a tribute to their dedication.

What does the Korporation have in mind for SilverLadder.com? What does it have against The Deck? Will they try to prevent the rabbit hole from opening? Are the Jokers in league with the Korporation? What will the passengers be required to do? Is Athena Snows in danger, or will she, as the “Queen of Hearts”, be looking for someone’s head?

Numb3rs Chain Factor: We Probably Should Have Seen This Coming