Discovering the Lovely City of Milwaukee

A breath of fresh air swept through the alternate reality gaming community last month when This Is My Milwaukee came to town. The surreal, humorous and down right strange 10-minute promotional video is so dense with story and snippets of clues scattered through-out, that it requires many viewings to fully digest.

As the video explains, Milwaukee was home to a corporation known as Blackstar. Blackstar employed many locals and developed some sort of meta-being known as Go.D.S.E.E.D. With the arrival of Go.D.S.E.E.D came the subsequent destruction of much of Milwaukee’s natural environment. As there was no other option, project Go.D.S.E.E.D had to be destroyed, and so it was put to rest, buried deep below Milwaukee’s Canning District in an emerald casket. However, Go.D.S.E.E.D fragments still attack the locals from time to time. Sheltering one’s self in buildings with proper protection or carrying a flare gun and a rebreather is vital to one’s protection from Go.D.S.E.E.D fragment attacks.

Soon after the ARG was released, the emergence of a possible dead drop became apparent. Hidden at the bottom of TIMM’s website was a link to a YouTube video. When the video title’s long string of numbers was decrypted, it revealed the New York Public Library, Rose Reading Room, South Hall. At the end of the video was the call number AI3.A23. An Unfiction forum member went to the NYPL and successfully found the book referenced in the video, which revealed a sheet of paper with a picture of a fennel bulb and a new phone number.

END_OF_DOCUMENT_TOKEN_TO_BE_REPLACED

Putting a Halt to a Vast International Conspiracy

It’s not every day I get sent blood money, but today’s FedEx delivery contained that and a whole lot more. Included in the packet marked “evidence” was a USB drive with files of bank transfers and a recorded message, along with a map to “evidence drops” and some photos (pictures after the break). The evidence comes from an informant in Berlin, where it was recovered.

It all points to stoptheinternational.com, which is a promo site for the new movie The International starring Clive Owen. Owen is Chief Inspector Louis Salinger, tasked with tracking down evidence against The International Bank of Business and Credit, a large bank which appears to be a front for money laundering and other illegal shenanigans.

Entering the serial number for the $2 bill in the packet shows a trail that leads to guns in Africa, then shows the bill’s current location. Urp. It’s a nice touch even if it’s easy to explain. Exploring further reveals another site, www.theibbc.com, for the bank being investigated. Beyond some boring photos and a hard to read typeface, there doesn’t seem to be much there.

However, stoptheinternational.com promises some continuing interaction via weekly updates and live events. The informant who hid the recovered packet of info has secreted other stashes in New York, Los Angeles, London and Berlin. Inspector Salinger is recruiting agents to help him find these stashes and analyze their contents. The first event is November 19th in Los Angeles. Check out the “Find the Evidence” link for the map, complete with countdown clock!

We’ll hope for field reports from the LA agents after the event. In the meantime, enjoy the copious documentation provided on the IBBC and its activities.

END_OF_DOCUMENT_TOKEN_TO_BE_REPLACED 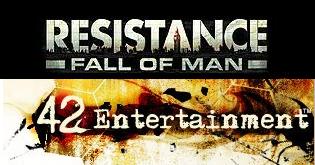 Have you seen the new advertisement for Resistance 2 on the television recently? Apparently, the end of the world is coming soon to a video game retailer near you. And with the game’s release mere days away, the Project Abraham alternate reality game has returned.

Over the summer, Dr. Cassie Aklin (Katee Sackhoff) selected candidates for highly experimental and dangerous clinical trials based on weekly votes by the players. Weekly calls from Dr. Aklin encouraged players to continue as one by one, the soldiers selected for injection died. Finally, only Sergeant Nathan Hale and Lieutenant Kenneth Danby were left alive: Hale, because he somehow survived the injection, and Danby because the players hadn’t gotten around to voting on his death warrant. Following a live event at the Penny Arcade Expo on August 29, the game’s websites went underground.

According to an article on Wikibruce, the silence came to an end on October 17 when the fax machine on the Alliance for American Autonomy website started blinking. Setting a record for longest fax ever, three days later the site was updated with a list of 20 cities and a countdown that expired yesterday at 2PM EST.

The expiration of the countdown revealed the Metastasis website and coordinates for the first five locations: Atlanta, Boston, Chicago, Denver, and Los Angeles. The first lucky player to reach each location picked up a Project Abraham satchel with an assortment of seemingly random items as well as a code that unlocked new puzzles leading to comic panels.

The next drops will take place today. With the game’s November 5th release, it looks like the endgame may be in sight, so be prepared for anything.

While it’s not quite a return to the gold rush days of yore, the alternate reality game for Velvet Assassin, dubbed Violette’s Dream by the players, involves much more than just fake Nazi gold bars. In fact, much to the delight of Dee Cook (addlepated) and Russel_k at the Unfiction forums, there are authentic gold bars ready to be found in the real world! According to a press release sent to us, while these gold bars are the first to be discovered, “[m]ore caches of gold are still being hunted down.”

The ARG, a campaign for the upcoming XBOX 360/PC game Velvet Assassin, has been entertaining players for three months thus far, and continues to play out at trailhead/meta site violettesdream.com. The premise of both the ARG and the video game is unique in that it is inspired by real-life British spy Violette Szabo. The video game launches in fall 2008, and we expect the ARG to continue past the release of the game, as

Along with the press release came some photos of the find in Fredricksburg, Texas, which you can see after the jump.

END_OF_DOCUMENT_TOKEN_TO_BE_REPLACED

Having a Ball with the Joker

On March 26th, a new chapter in the Dark Knight alternate reality game began, as the cell phones that some had received inside a tasty, Joker-commissioned treat — phones that some figured may never ring again — sprang to life. A text message read: “Hey clown! Long time, no crime spree! Well, put on your floppy shoes and answer this question: are you ready to get to work?”  For those brave enough to text back, answering in the affirmative, the reward was a second text: “Glad to see you’re still alive and kicking. I’ll be in touch before Poisson D’Avril”

A quick Google reveals “Poisson D’Avril” to be, literally, “April Fish” in French. Poisson D’Avril is also the French equivalent of April Fools.  This gave the indication that something Jokerish was about to occur, prior to April Fools!

The phones went active again on March 30th, but this time, with a call from an actual person instead of a text message.  The recipients were informed that they were one of 17 “clowns” remaining, and each were given a letter to remember and report to the rest of the “clowns” (for example, “‘E’ as in Elephant”).  Sixteen other letters were given to the remaining clowns, which led to a new web site being discovered — Clown Travel Agency.  The site was simple in design, with only a suitcase adorned with stickers from several worldwide destinations, and an envelope which stated “Departure Date: 4-01”.

END_OF_DOCUMENT_TOKEN_TO_BE_REPLACED

The sequel to Project Gateway is up and running, with a very slick design and some interesting real-world interaction thus far. Atrophied, a member of UnFiction’s forums, gave us a quick reference to all that has happened so far:

Clues from emails led players to a dead-drop at Providence College in Rhode Island on the 24th of September. The dead-drop gleaned a leaflet and CD containing an archive of the original PG1 website (including flash movies, audio files, etc.).

The next big event was an email from [email protected]:

Quote:
I think… I think it is time we talked.
Come to #historyneverdies on irc.chat-solutions.org. I know you know how to get there.
Sunday night. 8:00 PM EST.
If I were you, I’d start formulating good questions. I will only answer certain ones.
-The Historian

Sunday refers to Sunday, September 25th. A transcript is available at unfiction.

This chat then lead players to another real-world meeting, this time with an author at a book signing at the Colonial Mall in Harrisburg, PA. The author was Stephen Pytak (mentioned a couple of other times up to this point in the game). He gave us a letter from Shadown to Rowen Darkblade (both of PG1 fame).

Thanks Atrophied, it sounds like things are going well. I can see from the forum discussions that many players are enjoying this game thoroughly.