END_OF_DOCUMENT_TOKEN_TO_BE_REPLACED

“Stop The International” Returns With A Bang – And Lots Of Cash

January 16, 2009 / Celina Beach / Comments Off on “Stop The International” Returns With A Bang – And Lots Of Cash

Stop The International, the promotional ARG for the Clive Owen movie The International, first debuted in November 2008 when live events were held in several locations around the world, including Berlin, Los Angeles, New York City, and London. During these events, players were given clues to “evidence caches” containing money and documents which could be used to prove The International Bank of Business and Credit’s shady dealings. The game lasted four weeks… and then seemingly went dead.

On January 14th, the site went live again – and in a big way! In the four weeks since the first part of the game concluded, the main character, Inspector Salinger (Clive Owen) was dismissed from Scotland Yard after his main informant was killed in a suspicious car crash. However, he is continuing his pursuit of the International as an Agent with Interpol and with the help of a Manhattan prosecutor named Eleanor Whitman, along with the help of a new informant from within The International – and YOU! Salinger’s new informant is stashing more evidence caches around the United States and Europe in over 60 different dead-drop sites over the course of the next three weeks, and he needs our help in retrieving all the evidence caches so they can be submitted as evidence to Interpol, and bring down The International once and for all!

The first drop sites in the list went live on January 15th in New York City, Boston, Philadelphia, Houston, Austin, Chicago, Los Angeles, and San Diego. As each city’s countdown expired, a clue to the location of the cache, a number code, and GPS coordinates were revealed. Players in each of the cities rushed to the sites, and upon arriving, discovered a lockbox with a combination lock which could be opened using the provided number code. Packed inside the lockbox compartments was money of many different countries — US, Australian, and Hong Kong dollars, Mexican pesos, Russian rubles — and the money was REAL. The map page displaying the dead-drop sites then updated, indicating that the cache was successfully picked up and evidence forwarded to Interpol. As an added bonus, players could enter the serial numbers of the retrieved money and see the trail the money had followed – crime lords, criminal organizations, money launderers (however, apparently *any* serial number from any form of currency will work as well). All drop sites that went live yesterday were successfully found, with the sole exception of the first in New York City, more than likely due to players not realizing what exactly they were looking for.

END_OF_DOCUMENT_TOKEN_TO_BE_REPLACED

Who Watches the Watchmen?

If Warner Bros. can reconcile with Fox in time, you will be able to see The Watchmen in theaters come March 6th. In the meantime, fans can tide themselves over with The New Frontiersman, the online home of Rorschach’s favorite newspaper by the same name.

Whether the site will be home to a full alternate reality game or just a handful of sneak peeks is unknown at this time, but New Frontiersman is due to go live early this week when the evidence seal seen on the homepage is broken and should provide fans with a nice treat either way. Join Rorschach and delve into the conspiracy as it happens.

A Top Secret Conspiracy for Monsters vs. Aliens

January 6, 2009 / Michael Andersen / Comments Off on A Top Secret Conspiracy for Monsters vs. Aliens 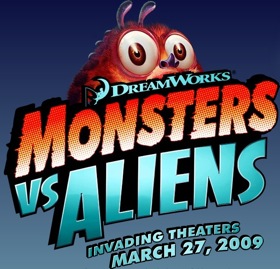 Conspiracy theorists are often a depressing lot, decrying the end of the world at the hands of a cabal of aliens, monsters, and the Illuminati. Thus, it was refreshing to receive an email from Jeffrey Freedman, internet reporter and administrator for TopSecretConspiracy, who somehow manages to believe every scatterbrained theory he hears while retaining a sense of humor. Of course, it helps that he’s promoting the new Dreamworks animated sci-fi comedy Monsters vs Aliens in the process.

According to Freedman, “There is a massive conspiracy at work being engineered from the media, the NWO, the Illuminati, genetic laboratories, corporations, public utilities, crossword puzzle writers, and various recreational senior activities groups. They want us to be passive and ignore the looming extraterrestrial threat in our midst. They want us to fall asleep at the wheel of our tractor trailer truck of truth and derail on the freeway of propaganda.”

TopSecretConspiracy.com is Freedman’s attempt to help people learn the truth, but he doesn’t stop there. In Episode 7 of “Expose the Truth”, Freedman infiltrated WorldCon 2008 to discuss a government and conspiracy to disguise the truth of the alien threat as “science fiction” stories through a comedic series of interviews with convention attendees. The previous six episodes are conspicuously absent from the website, no doubt due to those troublesome recreational senior activities groups.

io9 reports that a number of book covers filmed in “Expose the Truth” include the characters Bob, Dr Cockroach PhD, and Ginormica from the upcoming Dreamworks film Monsters vs Aliens, scheduled for wide release March 27, 2009. Furthermore, the website’s Terms of Use state that the website is made available by Pacific Data Images, Inc., a computer animation production company owned by DreamWorks SKG.

Interaction is currently limited to contacting Mr. Freedman via twitter or email with evidence of the massive conspiracy encompassing practically every aspect of our lives: however, once players prove their loyalty, they can become part of a “trusted cabal of citizen journalists.”

More Than Meets the Eye? ARG in Disguise?

Transformers fans are all atwitter about some mysterious goings-on in the trailer for the live-action Transformers movie, set to come out in July 2007. At a certain moment early in the trailer, the words “Sector Seven Org” and “takara83” appear at the top and bottom of the frame, respectively, leading the curious to www.sectorseven.org. Entering “takara83” in the submit box opens up a very stylish desktop, with a few goodies, including a live-action video and some image files. Also oddly present, a facsimile of a (fake?) legal agreement between “S7 Industries” and Takara, which is the real-life Japanese company that developed Transformers. Many of the desktop icons are locked, leading hopeful fans to believe that more is coming.

Is this a Transformers ARG? In my opinion, it’s too soon to tell, as right now it looks just like a standard movie viral site. But those Decepticons can be tricky creatures.

More details and discussion are at Unfiction.

NextArt: The Voice debuted last night at the Orlando Film Festival. Previously reported on here at ARGN, Jeff Wirth’s style of spontaneous theater blends real life seamlessly with a created reality, dropping a “spectactor” into a situation in which he or she is another person and must act accordingly.

If you’re in the Orlando area, you can use the contact information here to get involved with some of the real-life events taking place in the next week. Otherwise, watch the story unfold on the blog and on the Rosetta Corporation home page. Since there was a casting call posted to the Unforums a month ago, you might discover that some of the online interactors are people you know.