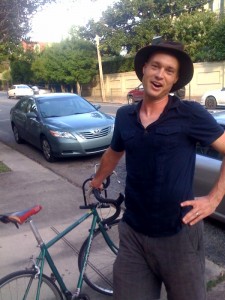 It appears that a penchant for gluten-free foods can cost you, as Evan Ratliff learned earlier today.  As of 7PM EDT tonight, Jeff, the owner of Naked Pizza, the only gluten-free pizza shop in New Orleans, caught Evan redhanded. As a gracious gesture, Evan received the pizza free of charge. As we previously reported, Evan has spent the last three weeks attempting to avoid capture as part of a contest for Wired.com, with $5,000 at stake.

Read about Evan’s capture here, or follow the whole harrowing ordeal by reading about the hunt at wired.com/vanish. Congratulations to the @vanishteam on Twitter for tracking Evan down, and to Jeff for sealing the deal.

Congratulations are also in order for Evan, who successfully evaded capture for three weeks before his appetite got the better of him. For a detailed account of his capture, read the breakdown at Newscloud.