Life on the Lawn Got You Down? Join the IFILR 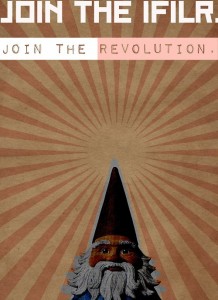 They’re everywhere: garden gnomes, pink flamingos, and “yard art” of people bending over. But think of how horrible it is to stand there, day after day in all kinds of weather. Well, the gnomes aren’t going to stand there any more, and they’re fighting back. Headed by General Secretary Gnome Choamsky, the IFILR (the International Front for Inanimate Liberties and Rights) is preparing for revolution. Earlier this month, the IFILR began a recruitment drive, targetting prominent alternate reality gamers with a direct mail campaign leading to the IFILR’s website, which contains audio messages and a recruitment blog. As part of the revolution, the IFILR has solicited user-generated recruitment materials, including one crossover submission that has brought sock puppets (from the upcoming Socks, Inc., game) into the mix.

Although couched in mystery, Choamsky’s master plan, Operation Mobilize, seems to promise real victories for the long-oppressed lawn ornaments. In Operation Mobilize, the gnomes plan to create an army of self-aware gnomes to fight for inanimate rights. The IFILR has also kidnapped Richard Dzubinski, an executive from EnviroCorps, the leading manufacturer of lawn ornaments, and imprisoned him in one of his warehouses. Trapped inside, Richard phones in updates to the What the Warehouse blog and interacts with players through SMS texts. With assistance, Richard has managed to uncover many details about Operation Mobilize. But Richard is not alone: there’s a gnome (possibly a dangerous one) locked in there with him.

Don’t be confused by Gnome Choamsky’s uncanny resemblence to that celebrity Travelocity gnome (who, it turns out, is Choamsky’s estranged cousin); on the contrary, Choamsky is a gnome all his own. In addition to Gnome Choamsky’s Twitter stream, other IFILR staffers are also available on Twitter, such as Choamsky’s assistant Gnomeatic Gnome, former Hero of the Soviet Union Vick Bolshe, and the ever-opinionated Pyro Gnome. Other gnomish members of the IFILR express themselves through audio clips available at the IFILR website, which provide unique insight into the workings of the mysterious, if diminutive, revolutionary organization.

But, like most human revolutions, things aren’t going so smoothly for the IFILR. Perhaps forced by his compatriots, Gnome Choamsky is going on vacation to “tour this country and see what it really has to offer, besides cruelty to gnomes.” Players interested in hosting and guiding Choamsky on this whirlwind tour are encouraged to use this sign-up page.

General speculation and information sharing can be found at this Unfiction thread, which has been really integral in the gameplay because so much of the interaction is one-on-one. So far, the mix of personal interaction through GTalk (Gnome Talk, of course) and SMS texts with more group-targetted campaigns that encourage user-generated content has been quite engaging, and the gnomes themselves are . . . larger than life.

Getting Wired For Your ARGNet Fix: The New Decode Subsite

Gentrification: The Game! Comes to Toronto Next Week