We Lost Our Gold: Pirate Booty Still at Large 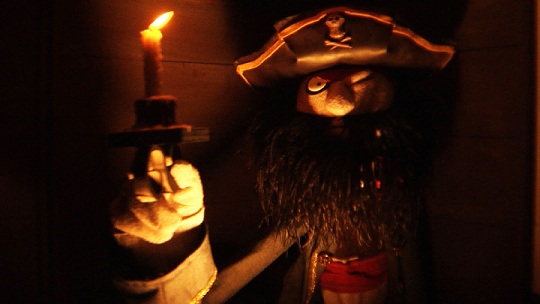 As reported previously on ARGNet, a befuddled pirate-and-ninja crew lost a treasure chest filled with 10,000 gold-colored US dollar coins somewhere in the five boroughs of New York City. This past Sunday, incidentally International Talk Like A Pirate Day, the final episode of the eight-part We Lost Our Gold web series aired, bringing the plot to a close. However, the pirate booty is still at large.

In July, several trailers, media appearances, and hilarious press releases built up interest for the series until it began in earnest on August 1st. Over the course of the episodes, the crew retraced their steps through New York City to try and remember where they misplaced the treasure chest. Starting off easily enough with Episode 1, the clues clearly led treasure-seekers away from Central Park.

However, as We Lost Our Gold progressed, the clues became more numerous and more difficult and also rife with red herrings—usually tributes to filmmakers. The episodes parodied different genres and popular shows, such as The Larry King Show, where it was revealed that the pirates had stolen the money from Glove & Boots, a web series-making puppet duo consisting of Fafa the Groundhog and his friend Mario.

When asked if he had any words for his victims, the Captain commented, “And who be Mario an’ Fafa, are they the Elmo-lookin’ an’ hairy-Squirrel thing we robbed? I’d tell ’em, ‘Never Trust a Pirate, ye Dolts!!!’ Har har ar har har! And then I’d tell ’em, ‘Can ye lend me a ten-er?’ Flat broke I yam.”

Embedding the web series with so many clues and herrings made for baffling and somewhat awkward moments in the episodes, but the shortest episode is the only one that I would consider “weak” or unsatisfying. The clues are, quite frankly, all over the place, and many of the websites appearing in We Lost Our Gold later had to add disclaimers to make it clear that there were no clues there. Everything that might lead to the treasure is in the web series itself.

Certain plot themes, along with the strength of the characters, tied together what could have been a completely unintelligible mess. First mate Mulligan’s constant wish to climb up to the crow’s nest, the Captain’s inconsolable sadness over his lost “stuffed animal-type” friend Tutty, Black Tom’s inscrutable ninja powers, and Crothers’ unfortunate luck are all entertaining plot points well-developed over the course of the series.

Furthermore, even though the pirates are made of felt they are incredibly expressive, and their acting abilities are far superior to many Hollywood celebrities, in my opinion. Add to this the in-character interactions available through Mulligan’s and the Captain’s Twitter accounts and the crew’s Facebook fan page, and We Lost Our Gold is a transmedia treasure hunt that catered to all participation levels—whether you were earnestly trying to crack clues to find the treasure chest, whether you were just following along with the series, or somewhere in between.

It’s unclear how close anyone is to finding the treasure, or if anyone will ever find it. According to the Captain, the treasure-seekers have “figured out more o’ them clues than I did… I just watch them viders on accounts I finds ’em amusekins. I like the bits where sods get hurts, especially.”

And, what will happen to the crew, now that the series is over? “We plans ta steal another 10,000 samolians as soon as we ruttin’ can. Tha HMS Maddie Hayes needs patchin’ up, she does, and I needs gunpowder. An’ tha rum be runnin’ low,” says the Captain.

The series itself has run its course, and all eight episodes are available at the We Lost Our Gold website. However, as of the time of this posting the treasure has been unclaimed, so head over to the Unfiction forums to join in the hunt, collecting and solving the clues that lead to the treasure.

EDITOR’S NOTE: Following Hurricane Sandy, We Lost Our Gold creators Vincent Bova and Damien Eckhardt-Jacobi dug up the treasure chest in the presence of a New York Times reporter in order to donate the proceeds to the recovery efforts. The devastation to New York City obscured the puzzle trail as it was originally conceived.

From Story to Legend Initiative Brings Together Transmedia Talent

Redesigning the World with PICNIC